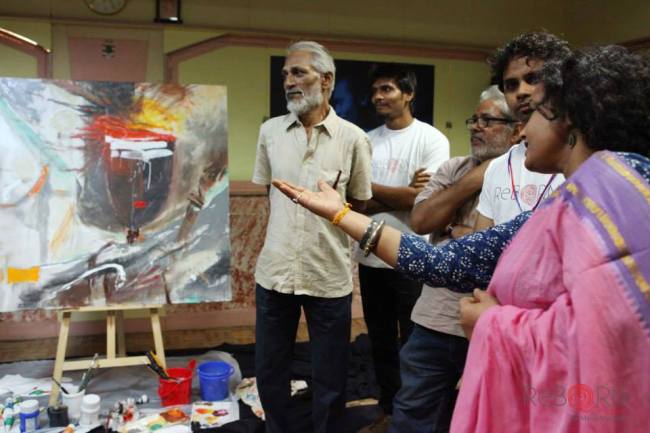 Mumbai, May 27, 2014: Last evening saw artist, Manoj Mauryaa transform visual arts into performing arts via a unique concept of Live Painting. Manoj chose this event as a precursor to his upcoming exhibition titled ‘Reborn’ which will be held at the Nehru Art Centre between the 10th-16th of June 2014.

“The Prelude to Reborn “event saw Manoj mesmerizing the audience with a spectacular live painting which was created in harmony with live music. Musicians such as Krunal Shah, Varun Rao, Shashank Acharya, Prasad Rahane, Jainam Modi, Dhaivat Jani, Amit Mhatre , Anith Sadanand and Annie Chawla who gathered from around the country to create a beautiful symphony were very excited to be a part of such a unique endeavour. This evening saw for the first time ever such an experiment done with art , where  the art  got sound and music got visuals.

Said Manoj Maurya, “ When a human life undergoes the process of being reborn, it comes closer to self realization, universal truth and unveils the purpose of it’s birth. There is no correct time for a person to be reborn. This is something that is waiting at every moment to happen to you and it’s up to us to choose to be reborn at that time. This is the ethos of my exhibition and with each brush stroke this evening to the beautiful melodies that were played by the brilliant musicians present; I found myself being reborn and being transported back into a new reality.”

It was clear though that the dynamic coming together of art and music left attending patrons moved. Actor Prashant Narayanan who is well known for his powerful performances in films like Murder 2, Waisa Bhi Hota Hai and Chhal said, “I witnessed a miracle this evening. I am deeply moved by the powerful art that I saw being created on Manoj’s canvas while he drew inspiration from the music being played. If this was a prelude to Reborn, then I can’t wait to see the actual exhibition. “

Also in attendance was director/producer Sanjay Sharma who has produced films like Ab Tumhare Hawaale Watan Sathiyon and directed films like Jaane Bhi Do Yaaron. Sanjay, also awestruck said, “ I have never seen anything like what I have witnessed this evening. It just goes to show that creativity knows no bounds and art can be as relevant as entertaining. Manoj has created a whole new perception of art today and I can only hope that a lot more people get to witness the creativity that is Manoj Mauryaa.”

Actress Asima Bhatt, who is famous for her inclination towards art cinema and has been seen in films such as Turning 30, Striker and Kismet Bole To said, “It was a mystical evening. It made me want to get up and dance while the performance was on. I hope that the art scene will see many more such amalgamations of visual and performing arts. I’m truly happy that Manoj invited me here today and I’m looking forward to the exhibition.”

All in all, The Prelude To Reborn was a beautiful evening, leaving the audiences hungering for more. Patrons are now looking forward to the exhibition, “Reborn”, a concept very close to Manoj Mauryaa’s heart and one stemming from his own personal experiences. The painting created at The Prelude To Reborn is to be showcased at the main exhibition.

Posted by STARFRIDAY NEWS on May 29, 2014 in Uncategorized